If you’re new to packaging, you can think about a package as a container that you fill with metadata. It contains a set of related features, customizations, and schema. You use packages to move metadata from one Salesforce org to another.

There are two kinds of packages - managed and unlocked packages.

Unlocked packages allow the users a means to organize their metadata into a package and then deploy the metadata (via packages) to different org. Unlocked packages will help the users to add, edit, and remove metadata in their org in a traceable way. The users can apply their source and metadata to multiple org, and upgrade their Salesforce apps easier and faster.

Managed packages are created by Salesforce partners to distribute and sell apps to their customers. The main purpose of a managed package is to bind code and configuration elements into a single entity. Those can be logical functional modules, re-usable code libraries, or entire sub-systems containing the functionality of a business channel.

The key benefits of managed packages are the following:

What is a Package Version?

Under the Package Version section, do the following:

Package Dependencies: The Dev Hub org can own multiple packages that are created in AutoRABIT. Such dependent packages will get displayed in this section.

From the Available Packages list, select the dependent packages that will be associated with the current module. Use the

button, move the package list up and down. Based on the selection, the top package will be deployed in the beginning and the process continues for the remaining dependent packages.

Upon confirmation, the package gets created and the progress status gets displayed on the Unlocked Package home screen. 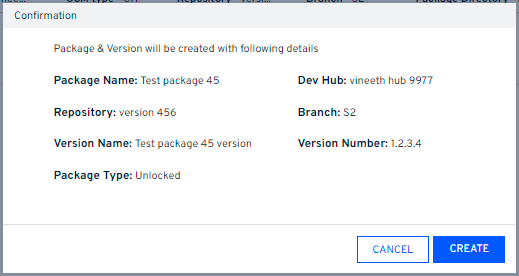 More Information on the 'Package' screen