Important!!
Only users on an ARM shared instance will observe the changes since the Salesforce API version is being updated to 56.0 as part of weekly hotfixes to the shared instances only.

Troubleshooting:
Ensure your Salesforce API version in AutoRABIT matches the API version of the Salesforce org. Failure to match the version may result in metadata object commit/deployment failure in your target environment.

Use Case:When you use AutoRABIT to perform an EZ-Commit and choose the Flow and Flow Definition components from a Salesforce org, the properties 'triggerOrder' and 'Overridable' do not reflect in your target branch.
When you try to deploy using the above revision after changing the API version to 56.0 in AutoRABIT, it fails.

You'll need to retrigger the commit and deployment process in order to make the deployment successful.

The below table highlights the newly supported metadata types for each API version.

The following fields have been deprecated on the NamedCredential metadata type in API version 56.0. These fields are valid only when namedCredentialType is null or set to Legacy.

The newly supported metadata types are available on the Salesforce website, link: https://developer.salesforce.com/docs/atlas.en-us.pages.meta/pages/pages_intro_whats_new.htm

Troubleshooting:
Below is the list of the metadata types in the API 55.0 version that are not picked up during deployment or CI job operation:

Below is the list of API 49.0 metadata types supported for both Salesforce DX and non-DX platforms: 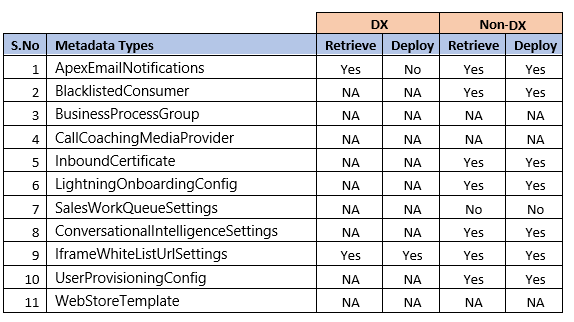 For versions 48.0 and earlier, please refer here to find the list of Salesforce objects and their supported API versions.