The CI JOBS screen is best viewed when the zoom setting is set to 80% on your chrome/firefox browser.

The CI JOB RESULT is the page where you can:

View the builds that are in the deployment queue on the Deployment Workspace on the right side of the page.

Important Notes:
Different scenarios in which the queued build will be seen in the Deployment Workspace:

For each Build, the following information is displayed:

Hover your mouse over (

) icon under the Build Details to find out more two to three choices depending on your configured job:

View the warnings that occurred when builds were deployed. If no warnings are found, the 'No Warnings Found' popup will appear.

The Changes screen will display the following info:

Static Code Analysis is usually performed as part of a Code Review and is carried out at the Implementation phase of a Security Development Lifecycle (SDL). Static Analysis tools such as ApexPMD and Checkmarx continuously detect and report on data flow problems, software defects, language implementation errors, inconsistencies, dangerous usage, coding standard violations, and security vulnerabilities.

SCA will have information for both PMD and Lint report (Lint report will display information about AuraBundle components files only). This report will have info about the files that were reviewed and the related violations that occurred. Click on each file to view its related violations that will appear at the bottom right side of the page. If you click on any violation, it will take you to the respective line (in the black screen on the right side) where such violation occurred. 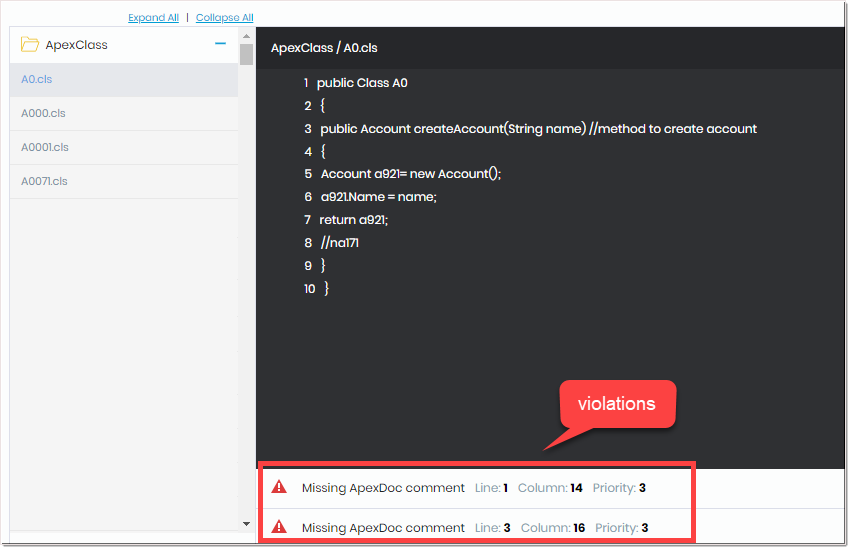 Under the Deployment details, you can view the below information:

You can download the deployment, quick deployment, or rollback reports for your build via hovering the mouse over (

) icon under the Deployment Details section.

View the post-deployment activities that were triggered, log report, and post-activity status i.e. success or failure.

View the success and failure test percentage report for your build triggered.

Was this article helpful?